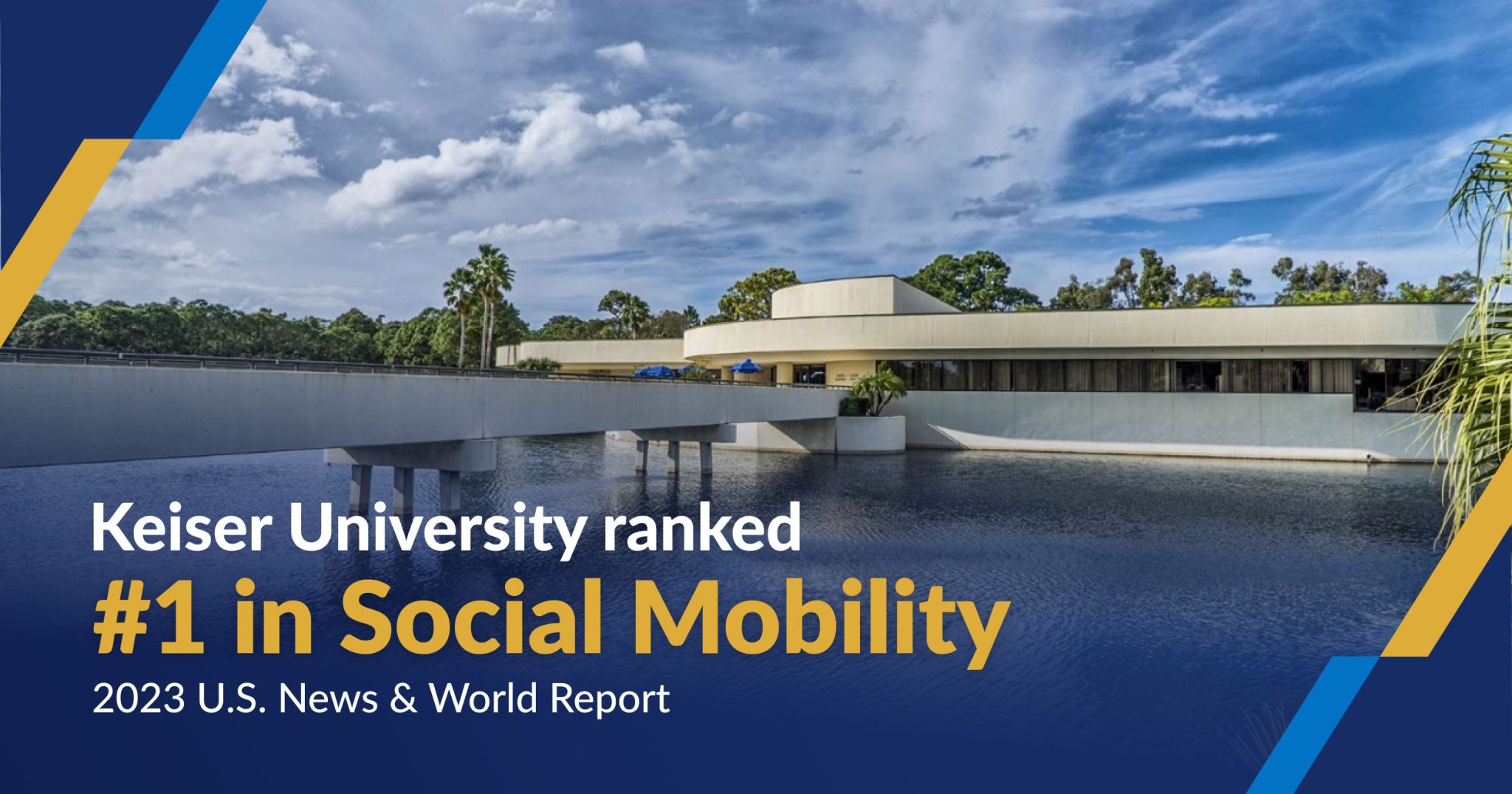 Keiser University has been named the No. 1 university in the country in providing social mobility to its students according to U.S. News & World Report’s 2023 Best Colleges ranking, the nation’s leading college rankings list.

“We are humbled to be recognized so prominently among the best school in the nation as the top university in the country in providing social mobility to students,” said Arthur Keiser, Ph.D., Chancellor of Keiser University. “Keiser University is dedicated to creating an inclusive future for all by providing access and opportunity to a diverse population of students and helping them create positive outcomes in their lives.”

Keiser University has continued its climb as one of the best schools in the country for social mobility, earning a top spot on the ranking in each of the four years since U.S. News first published the list. Last year, Keiser University was ranked No. 5 in the country and No. 1 in Florida in the category. In 2021 Keiser ranked No. 11 in the category and took the No. 34 spot in 2020.

The question of how well universities prepares low-income students for success has garnered attention in recent months with some universities receiving criticism for failing to create positive outcomes for disadvantaged students. Keiser University has closed the gap for low-income learners of all ages by offering unique and targeted student support services, and degree programs in many emerging and critical industries.

“As a university that prioritizes student success and career attainment, we are incredibly proud to continue developing student-centered resources that empower our students and help them achieve the American Dream,” said Keiser. “This lies at the heart of our mission and Keiser University will continue its effort to improve quality of life for individuals and communities throughout Florida and the nation.”

The 2023 U.S. News & World Report Best College rankings assess more than 1,800 U.S. bachelor’s degree-granting institutions on 17 metrics and place the largest emphasis on a college’s ability to retain and graduate its students. Other factors include class size, undergraduate academic reputation, and how much a school spends per student on instruction and other related educational expenses.

Keiser University’s rise the U.S. News rankings is the latest honor in a series of positive and impactful news. In August, Keiser University was named the No. 29 Best Hispanic-Serving Institution in the country and climbed three spots to earn No. 14 Best University in Florida by Niche. In July, Keiser University and the National Association of Hispanic Nurses announced the formation of a nursing advisory council to help solve Florida’s nursing shortage. The University has also recently announced new degree programs in women’s health nursing and Fintech, and the development of an aquatic center at its Flagship campus.

Keiser University enrolls approximately 20,000 students at 21 campuses throughout Florida, internationally, and online. For nearly half a century, Keiser University continues to address the talent needs of Florida. Most of Keiser’s academic degrees are in industries identified as emerging or critically needed and address job growth in Florida’s targeted industries.

Keiser University is a private, independent, non-profit university serving nearly 20,000 students at 21 Florida campuses, online, and two international sites. Co-founded in 1977 by Chancellor Arthur Keiser, Ph.D., and Evelyn Keiser, Keiser University currently offers more than 100 degrees from associates to the doctoral level. Keiser University is a member of the Hispanic Association of Colleges and Universities and was ranked No. 1 in the U.S. in Social Mobility by U.S. News & World Reports in 2023.